Like those before him
he seeks control of nature.
Water finds a way.

If he were around when the torrential rains were coming down this winter and I would take the dumb mutton head out to chase after a ball in the street, Youngest would throw on his camo rain boots and a jacket and come out with me. He would go into hunter/gatherer mode, sniffing out rocks and stones and decorative bricks and tiles left during construction next door. He'd haul them up and add to his dam. He relocated the dam a couple of times, finally settling on a spot near our driveway, where he knew he could frequent without me breathing down his neck, aiming to restrict his movement. 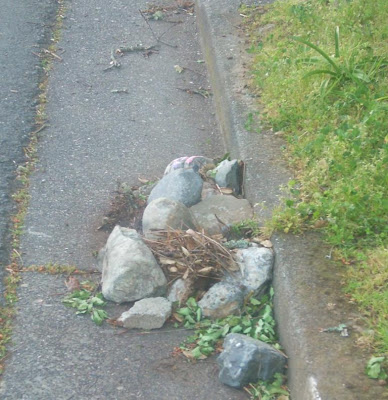 I am the dam builder and he is the water.

Dam, this is cool.

You are making me want to go on a hike with a dog and a walking stick. And a little dam builder at my side. My office feels all closed up and stifly now.

I enjoyed both your poems, but particularly:

I am the dam builder and he is the water.