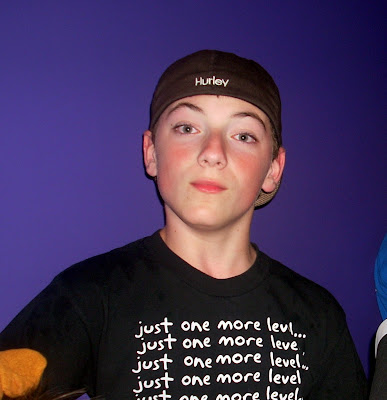 He attempts to walk the sullen teenager walk and mope the sullen teenager mope, but he doesn't have it quite down pat yet. We still perform our mother-and-child rituals, although his willingness to perform them in the company of others has diminished somewhat. That said, his response when a sleepover mate teased, somewhat singsong-like, "Ha ha, you kissed your mother," was a nonchalant, "Yeah. So?" Yeah. So? He loves his mother.

He is my height now. Since I'm 5'2", I don't know if being my height is a grand achievement at 12. [Memo to self: irk him by reminding him that I was 5'2" at his age. That oughta do wonders for his self-esteem. He'll worry, "What if I don't grow any bigger?"] His feet long ago shot past mine. Yesterday, whilst out buying him yet another pair of sneakers because he outgrew yet another pair, we realized his shoe size is now an 8.5. Clown feet, really, on a boy who is only 5'2". Labrador puppy feet, clearly. "Oil barges," his father says.

When we compared heights and saw that he is, finally, my height, he whooped it up. He whooped it up even more when his dad said, "You'll be able to call her 'Shorty' soon." I responded with, "At least I'll still be prettier."

Email ThisBlogThis!Share to TwitterShare to FacebookShare to Pinterest
Labels: eldest, getting old, growing up, love, silly

Doesn't that just drive you nuts? And he's going to do it when you're 90. I know because my mom is 69 and I still rub it in that I'm taller. I'm so screwed when my kids inherit their father's 6'4"-edness.

I boy passed me by height-wise a while back, and I'm over 5'7". It's weird looking up at your kids, takes some of the intimidation factor out of it.