What came to mind when I saw the prompt?
Just this.

Does Disney know how to infiltrate nearly every thought process of the human animal? I'm afraid the House o' Mouse does. I'm afraid it does.

"You (Are a Human Animal)" was on one of the Sing Along Song videos we had when the kids were much younger. Bad mother that I am, I would let the kids watch them repeatedly. Not-so-bad mother that I am, I would more often than not watch and sing along with them. [The lyrics most sticking in my head: You are a human animal. You are a very special breed. You are the only animal who can think, who can reason, who can read!] 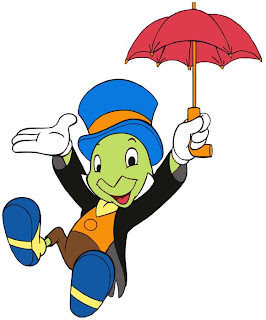 And they're not going to let some dumb ole cricket -- or their silly ole mother -- tell them otherwise.

Battles are fought (and lost) every day in child-filled households around the world. Some of us human animals are smart enough to walk away from a battle. I always walked away from this one.

[Image taken from someone who clearly borrowed it without attribution to the House o' Mouse itself. Let me therefore accurately note that it is courtesy of the conglomerate known as Disney.]

An excellent take on being human.

The problem is, of course, that many animals do "reason." Their reasoning is not finely tuned, but it's there. To demean animals as being nothing but a mass of instincts is a big mistake.

I don't know that I'm demeaning animals. I think it's the cricket that's doing the demeaning.

I wish more human animals would think, reason and read!

my dad hated disney... he called it the park where humans were run by animal worship.

fun and wonderful take on 'human'.

I hope you put them back in their cages before you walked away.

I agree with musingwoman. Too many people don't think and reason. On another note, I hope the house of mouse doesn't come after you for using Jiminy.

At least at that age the arguments are clear cut and usually can be solved by sending all involved parties to their rooms or giving everyone a popsicle. Later when Disney is just a memory it gets a little more difficult...As the mother of young adults, I am wish for the days of Disney and Winnie the Pooh when they thought I had all the answers...