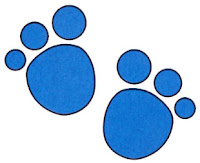 [With major apologies to Beck at Frog And Toad Are Still Friends because she is, undoubtedly, the best at this. I'm hoping she sees this as flattery rather than thievery. If you've not read her simply fabulous Halloween scary stories, taken from the pages of beloved childhood classics, you'd best go do so now.]
The detective entered the sparsely decorated living room, noting the upended side table, its drawer yanked out and sawed into easily a dozen pieces. A large chair had been gutted. There was no other word for it. Stuffing was strewn everywhere and the fabric had been sliced and slashed repeatedly. A long, serrated knife was on the floor beside it.
He moved about the living room, trying to avoid the flecks of black and white all over the floor and the remains of the chair and side table. He wasn't sure what the flecks were. He thought they looked like pepper and salt. The forensics team would be able to tell him for certain. He thought about putting a grain to his tongue, but thought better of it.
"What if it's anthrax?" he wondered.
"Bill, it looks like there's blood on this green striped shirt," his partner called to him from the bedroom. "It's dried and, swear to God, it looks like a freakin' paw print."
Bill made his way to the bedroom, noticing along the way a smear on a State pennant hanging on the wall. He looked closer and thought he could make out a print as well. A paw print.
"What the hell happened here?" he asked Dave. "You got a body yet?"
He looked in on the bedroom. An alarm clock was smashed to bits. Sensing movement outside, he looked to the front. The wind had blown some mail around. He eyed the mailbox. It, too, was smashed in. One of the floating envelopes caught his eye. He ran outside to retrieve it.
It was a post card from State University addressed to a "Joe Burns." It was signed "Steve." It was blank except for a bloody paw print and the signature.
He looked toward the backyard, as the wind blew open and shut the gate. The gate wouldn't close completely. A body was on the ground. He'd seen a photo of a guy in a gaudy purple sweater with some mutt in the living room. This must be Joe Burns. He noticed the perp had started digging near the body. A grave, maybe? A shovel and pail filled with dirt were nearby.
He took out his notebook and started taking notes - writing down clues, if you will. He was thinking this guy "Steve" looked pretty good for this.

[Thanks, Mama Kat at Mama's Losin' It, for this week's Writer's Workshop. Oh, and if you could find it in you to "randomly" select me for a Flip camera, I'd appreciate it.]
at October 29, 2009

"He thought they looked like pepper and salt."
HAHAHAHAH!
This post was evil. Beautifully evil. I LOVED IT.

Funny!!! I'd peg Steve, too. He always seemed kinda shifty if you ask me...

Speaking of villains in Blues Clues...

Did anyone ever notice the resemblance between Joaquin Phoenix as the villain Maximo in Gladiator ( http://www.imdb.com/video/screenplay/vi1017774361/ )

and Joe from Blues Clues? Totally creeped me out when I saw the movie.