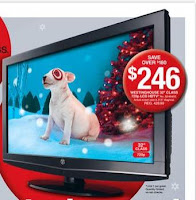 The alarm went off at 4 a.m today. I was sleeping in Eldest's room so that he and I could jump out of bed (and couch), throw on some clothes and get to the local Target to wait in line for the 5 a.m. opening. It was his first go at Black Friday.
The lure? A 32" LCD HDTV from Westinghouse at the unbelievably low price of $246. There were about 75 people in front of us when we arrived at 4:10. Another 150 straggled in behind us by the time the doors opened at 5. Target employees had handed out maps showing where all the doorbuster items were. The Westinghouse TV was located beside an Apex 40" HDTV. Both were situated in the Women's Clothing section.
The woman right behind us in line was hoping for the TV, too. We were pretty sure they'd all be swept up. I mean, at that price, of course they're going to go fast and probably a lot of people in front of us were angling for one of the "limited quantity" items. But we crossed our fingers.
Eldest has been saving up for six months or so. The money he got for his birthday pushed his savings to the attainable mark. He was over-the-top excited to get the TV. His excitement was contagious.
We got in and made a beeline to the TVs. People were grabbing TVs and going quickly on their way. There were two left. I told Eldest to hold one. It was a 32" but an Apex, not a Westinghouse. There were still a few 40" Apex left, but the sign said $449 for those. I figured our store didn't get the 32" Westinghouses, so they put the 32" Apex out instead.
SCORE!
I even helped the older woman behind us get hers. And I helped another woman get hers into a cart.
HOORAY!
By the time we wound our way to check-out -- having picked up a Batman Xbox game for $20 off and having never found any of the purported RCA 7" dual-screen portable DVD players going for $88 -- we were happy as can be.
Until we found out the TV was not the same price as the Westinghouse. It was $349. I looked at Eldest, all eager, and I paid it. Then I went out, disappointed.
And I was even more disappointed when the woman who had hung out in line with me found me at Sports Authority and said, "Did you get it at the Westinghouse price? A bunch of us complained and we got it. They didn't tell us it was a different price! They just told us to take those 32" TVs. It was unfair! Go back. Talk to Matt."
I did go back. I explained the issue. He declined to help me, saying that they'd only given it right then to those people. The people that I had been with? The loud complainers? Not to the meek who felt played for the fool at 5:15 in the morning?
We left. And then I explained to Eldest what "bait and switch" was. And how it didn't seem fair that they placed those other 32" TVs -- the ones which turned out to not even be on sale at all -- right next to the ones on sale. [Remember, all the way over in the Women's Clothing section.] And I explained how you can't really ever win against a big corporation. And that the best you can do is to talk with your wallet.
We returned the TV. He was disappointed. I am, too.

[Image courtesy Target.com. I use the term "courtesy" loosely.]

I hate that that happened. Good for you to take back the TV.

Oh I would be ticked too! I am glad you returned it. that is just wrong.

Sucky lesson on bait and switch. Awesome lesson on principles. Did Eldest understand the reason for the return, or just disappointment about the lost opportunity?

I suppose it is too late for Santa to pull a rescue on this one, eh?

Boo on Target for this one!

WOW...that is OBSCENE! What a way to learn a lesson...and what a lesson to have to teach your son...if you are loud and complain you get what you want...UGH!

so sorry...and I agree BOOOOOOOOOO on Target!