Every Day Should be Veteran's Day

The lad had a substitute for an entire week whilst his teacher recovered from a pulled muscle in her back. [I can't physically keep up with one second grader on a good day; I can't imagine having to do so when in agony.]
Mr. M. is long retired, and he's starting to forget the littlest things. [Names and connections and how much of a problem child he's got in that kid. And that kid. And not to mention that one. Oy.]
But he's a he, and that makes a world of difference in the world of a second grade boy. And he enjoys keeping the kids moving. And he recognizes Youngest as a smart young whippersnapper who can be Mr. M.'s personal assistant. [And he recognizes Youngest's mother as the one to hit up each morning for copies of assignments borrowed from other second grade teachers.]
I don't think Youngest gets the poignancy of Mr. M.'s comment on his drawing. But I do. 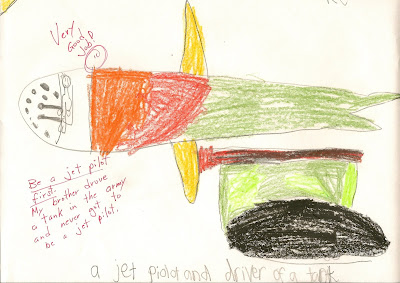 I thought about saving this for Wednesday, November 11. But I figured we can't think good thoughts about those who have given their lives for our country too often. So say a prayer for a vet today. And say another one on November 11.
Thank you, Mr. M.'s brother. Thank you for your sacrifice.

(My son wants to be both a jet pilot and an "army man" too.)

Loved your post. My oldest mentioned he wants the military to teach him to be a pilot.
My Hubs teachers 5th grade. He had a parent conference yesterday for a boy who is new to the school. His mom said it was his 14th school attended due to moving and family issues. She said he was the first male teacher he's had and the 1st time the son was excited to go to school (due to school as well as teacher).

wow. heavy stuff. was this the topic at the dinner table?