All of you hard-working, full-time WOHMs might want to skip this one today seeing as I'm going to be a whingy bitch and complain bitterly about the prospect of having to become one of you again. [Go ahead, send me daggers now.]
It's been three years, four months and eight days since I last clocked in a full day of workin' for the man. Since then, I've done things on the side, but I've not been tied to someone day in and day out, swallowing down the bile everyone is forced to swallow whenever a stupid ass boss says something stupid.
Phew.
I was "hoping" that was all going to change, having thrown my hat in the ring for a job as a library clerk at a local elementary school. Since I'm a paid yard duty supervisor at my son's school -- imagine me puffing my chest with pride as I say that -- I'm considered an internal employee of the school district. That means they have to interview me for any job that I say I want.
I still have to sell them on hiring me, but, hey, what's not to like about me? [Ahem.] So at 7:45 this morning, I was supposed to be interviewing for the job. Until they called me at 2:30 yesterday afternoon to say that another library clerk already working at the district wants the job so that means they have to give it to her.
[Hey, you can't tell me that's not sweet, eh? You see why people want to start working for the school district? Because they have to give it to her, whether the principal likes her or not. Go, union, uh-huh. Go government entity, uh-huh.]
As for me, I'll do what the HR chick said to do and "be on the lookout for a new posting going up in the next week." Oh, and finish up my sign. The job I was going for? It essentially is the same as this: 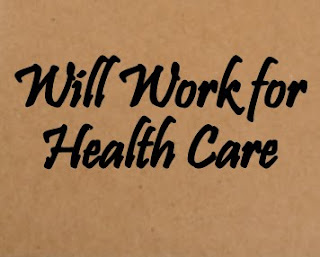 You crack me up. Period. Hilarious.

this totally strikes a nerve with me...just as it does you! the in house hiring...is oh boy...UGH! i think the union sucks most of the time...as it keeps shitty employees...even when they suck as teachers and child care providers...we have that going on here...and i could just scream. you see i am not tenured...so i might lose my teaching job...but the lady next door who has some serious issues & i would scream and throw a hissy fit if my own child was in her classroom...has been saved by the union...REALLLY! REALLLY! cuz' she SUCKS!

happy job hunting for health care! another subject to throw up about...ugh!

I hope you didn't bash your thumb with the hammer as you were hanging that sign there. 'Cause you'd be effed.