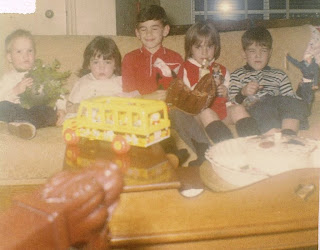 [Sunday Scribblings is all about being brave this week.]

Email ThisBlogThis!Share to TwitterShare to FacebookShare to Pinterest
Labels: christmas, family, parenting, past

That is really cute. In our house, it was Mom. Dad (me) was always awake with the kids, laughing and giggling as much as they did. I miss those days.

the idea of parent(s) as "beast" is great! comical.

I cracked up at the line, "coffee was to be made and brought to the master bedroom as a device to ease the awakening of the beast". My kids do the same thing! lol I must be the beast.

this is so funny

i very much enjoyed it..

since these are our house rules, i have to ask: which one of my kids are you?

My dad used to draw a picture of a skull & crossbones and attach it to a string tied across the top of the staircase. WOE BETIDE anyone who crossed that line. (We never dared.)

We may all be related LOL. My kids could have their stockings. The stocking would be on their bedroom doors with the hopes that we could coax them into spending a little time playing with the contents in their rooms before they started making enough noise to disturb us beasts LOL

A fine post with a child's view of "brave". Your story of Christmas past reverberates with love and humor. I remember waking the "beast" as well. And thank you for visiting my post. That was not an easy write!