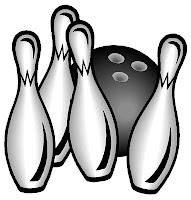 1. Pete flew down to L.A. for a company Christmas to-do and meeting. The main event? Bowling!
2. Talking about it when he got home, he said, "The bowling alley was so L.A."
3. "There were strippers?" his Eldest asked excitedly.
4. Isn't that what everyone thinks of when they think of L.A.?
5. Speaking of strippers, a second grader in another class at Youngest's school was leading a rousing game of Simon Says when the yard duty supervisor happened by. "Simon Says to touch your priv8s," the precious boy said.
6. While the yard duty lady was grabbing the office referral form from the shed, most of the boys in the class took to insisting, "Simon Says all the girls strip down naked."
7. Now, I play a rousing game of Simon Says with the kids in the mornings before their ever-so-slowly-walking teachers come to pick them up. But those are commands I've never given.
8. Perhaps "rousing" is the wrong adjective to use in Item #7?
9. In the midst of major computer angst the past couple of days, I managed to get my topline summary of my focus groups done and to the client on time.
10. She managed to send me a note saying she wouldn't read it until next week but acknowledging their timely submission. F&$k.
at December 11, 2009

Don't remember ever playing that version of Simon Says. Maybe that came from LA too, with the strippers.

"Better three hours too early than a minute too late," or something to that effect, said Shakespeare. Don't you just get all those warm fuzzies for knowing you got it in on time, even if she isn't going to read it yet?! *snorts*