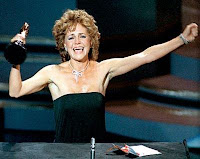 358°: The street sweeper swept my street for the first time in close-to-forever. Just hours before I had resigned myself to sweeping up the leaves so as to ready ourselves for the next winter storm. Thank you, Sir Street Sweeper!
357°: Getting encouragement from folks IRL and out yonder on the whole concept of 360°. Makes me want to go all Sally Field on y'all.

6°: I sucked it up and got in touch (granted, secondhand, but, still) with a woman who despises me. Why does she despise someone as loverly as moi? She thinks I got her friend laid off years ago. Did I? What I did was stop good employees from being laid off by offering to temporarily take on a gig I despised. Granted, it was her friend's gig, so I guess the short answer is I did contribute to his being laid off. I guess a longer answer is that I got him "offed" in order to save several good people. So, yeah, I got the high-maintenance screwball fired.

[Look over that way -- POINTS UPWARD TOWARD SIDEBAR -- for the original post about my 360° Project.]

Email ThisBlogThis!Share to TwitterShare to FacebookShare to Pinterest
Labels: 360 degrees

So, how did the contact go with the woman who despises you? DISH!

Yeah... you can't drop a bomb like getting in touch with someone from your past without further detail.

...our doomsday clock is ticking away as well. It's a scary thing for us too. :( We can't get anyone to insure my husband 'cause he's too high risk. Emily has had RSV (twice now) so they want to charge twice the price to cover her and throw in a no pre-existing clause! *sigh*