I'm not on Facebook much. I guess I'm not really that into knowing about your kills or your farm animals.


[Although, hey, flash of genius here: I might be interested in a game of armed farming animals roving the countryside and killing any human they encounter. Let's see, 10 points for a Census worker; 25 for the guy who offers to paint your house number on the curb for $20; 5 points for a postal worker; etc.] 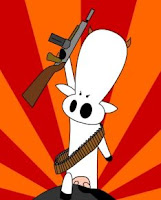 I do check in from time to time, and my tweets go directly into my Facebook, so I'll often get emails from FBriends about those. If I want to maintain that FBriendship, I'll go in and look at their stream. I'll look at the feeds from all of my many FBriends. And I'll troll for blodder.*

"Pollyanna Madeupname became single" was one I saw this weekend. All of Pollyanna Madeupname's many, many, many FBriends know that she was widowed or divorced or separated or broke up with her partner with just that one little update. Being the morbid onlooker FBriend that I am, I wanted to see if there were any other tidbits to give a sign as to mental status or tabloid worthiness or the like.

Nope, no dirt. Just a now-single Pollyanna. Without a farm animal in sight, armed or unarmed.

*You know, fodder for the blog.
[Image from animation by Bjorn-Magne Stuestol]
at January 18, 2010

I have tried to set my apps so that they don't show up as status reports, but I don't know how successful that has been. I'm really trying to cut back on these games. I'm down to 2 from 6, so there's hope for me yet. Maybe.

I am certifiably FB phobic. I have no interest in having people from my past crawling out from under their rocks to track me down, or not so friendly extended family. Scares the bejeezus out of me, homicidal farm animals notwithstanding.