Three years ago, I posted Wordless Wednesday of a picture painted by Eldest when he was in the fourth grade. I look at the painting, and it makes me weep.
He is a shy boy, my first-born son. Sweet, too, he is. Smart, really. An excellent writer. Really good at Call of Duty or any violent Xbox 360 game, too.
First and foremost, he is excruciatingly shy. I ache about that shyness of his. He wasn't always that way. The first five, six years of his life, he was the toast of the town, wearing his superhero clothes and disguises everywhere he went, standing proud when little kids mistook him for the real Superman, chatting up a storm with anyone. Then, one day, a switch clicked in him and he stopped putting himself out there.
Don't think I haven't tried to find the trigger. Don't think I haven't tried to cajole and encourage and support any effort to put himself out there.
He is who he is.
Eventually, we accept what needs to be accepted. I accepted his shyness long ago. I am at peace with it. I'm enjoying Holland, as it were.
His best friend called last night. His last day at the same middle school as Eldest is tomorrow. He wanted to call and tell Eldest that.
He's transferring to another middle school in town, another rich white kid using the f%cked-up No Child Left Behind Act to go to a "better" school. It's a school without the angst of poor people or people of color or the children of illegal immigrants or illegal immigrants themselves. [They are illegal, but you can call them "undocumented" if that makes you feel better. You know what I call an undocumented pharmacist? A drug dealer.]
I am sad beyond belief. And I am angry. I am not angry that they are jumping ship. I will not tell you how to parent your child. You don't tell me how to parent mine.
What makes me angry is that I specifically asked his mom about this situation several weeks ago. She assured me he wasn't going anywhere. The paperwork to transfer had to be put in by December 28. Anyone who requested a transfer would be granted one, using the f%cked-up NCLB rules. This means she has known through Christmas and New Year's, through sleepovers and movies, through hanging out and chatting it up. She has known and never said a word.
So allow me a bit of outrage. I am who I am, after all. 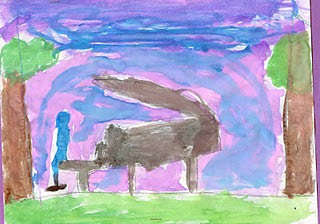 [Edited to add: My outrage is mitigated by the fact that they appear to have NOT filed the paperwork. They had been on the waiting list since September 2008. The middle school apparently approached them. So I was wrong in feeling misled. I am a bad person.]
at January 08, 2010

Email ThisBlogThis!Share to TwitterShare to FacebookShare to Pinterest
Labels: are you freakin' kidding me?, eldest, friends, public schools, the mother in me

I'm so sorry. That stinks, all around.

I would be peeved too.
Our kids go to a very diverse school. The only other option is private schools. Pretty funny though that this year due to economics so many are back in public school.
I am so glad that my kids are living in a reality.
Fortunately the school's scores are "high" even though many speak English as a second language.

I would be upset too. It would have been much easier for you to brace your son had you known about the move.

You have every right to be angry! I am angry just reading about it! Grrrr...

While the other mom had every right to take her child to a different school, it's a shame she had no better sense of empathy. You are right to be angry, but don't let it eat you up. I'm sorry for Eldest, because it's tough to "lose" a friend at any age. However, perhaps you can encourage the boys to remain friends after school? Difficult, I know. But, possible?

Oh. That sucks on so many levels. As a parent of a child like your eldest, I feel your outrage and pain, too. And the same thing happened to my daughter. They were going to the same high school and then a couple of months before school started, BFF moved to a different zone.

That picture is quite amazing. And as someone who clung to my one best friend all of grade school, that is so hard that your boy's friend is switching schools. I hope some good people come in to fill that space left by his friend.

It drives me nuts that she either just "forgot" or thought the split between your son and hers would be easier with no warning. WRONG!

Some people can be heartless.