1. Presenting to a county committee over in Alameda this week, I realized that the homeless could essentially get their fill of food just by going from public meeting to public meeting.
2. Since I was a presenter, I didn't get to partake of any of the delicious breakfast offerings.
3. Further proof that there is no real economic crisis among California's cities and counties. They're all just a bunch of hungry whiners.


4. Has the federal government saved enough money with the shutdown in D.C. to at least pay for my health insurance?
5. Here's another musing on the government: Why is the daily pseudoephedrine limit 3.6 grams?

6. Wouldn't it take a boatload more to make enough meth to actually sell? Or at least get off on?

7. And, speaking of meth, is the number of meth heads listening to all-news stations on AM radio large enough to justify ads seeking them to do a research study?

8. I just about spit out my Sudafed when I heard that ad. 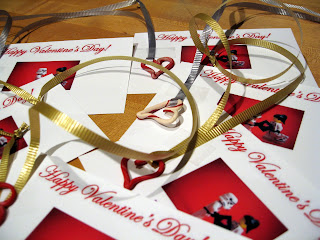 9. I had to tell all the kids in Youngest's classroom that the "candy" heart attached to their Valentine's Day card should, in fact, be spit out if they had put it in their mouths.
10. He had fashioned the hearts out of Sculpey, an art form we learned from Scribbit last year.
at February 13, 2010

Oh, the cards are so cool! We just bought a box from Wal-Mart. I'm just cool like that...or lazy, either way works for me. *LOL*

Been catching up on the blog postings. Email to follow...

Number 9 scares me more than the rest of them. But they're gorgeous cards! I love Scribbit.