Unlocking the front door and pushing it open, I enter the hallway. There is a noise upstairs. Someone who sounds like a cross between Elmer Fudd and Scott Baio is talking upstairs.


*          *          *
Last week when I went to unlock the front door and found it unlocked, I was totally spooked. "What the hell is it doing unlocked?" I wondered. OCD that I am, I almost always double-check to make sure it is locked before I leave. I see the dog on the couch in Eldest's room. She thumps her tail at me but doesn't rise. I don't know whether to interpret her presence as a good sign or not. She is, after all, a whore dog who will befriend anyone. She'd certainly let some Bones or CSI: New York murderer in. I had crept up the stairs, only to hear my husband shout out, "Hello." He had arrived home. He had unlocked the door. I hadn't noticed his car in the driveway. I am an unqualified wingnut.

Someone is in the house. Someone who definitely means me harm.

I dial Pete's number and tell him of the predicament. I REALLY have to pee, but I can't go into the bathroom because, hello, there's a serial killer with a penchant for bunnies and curly-haired girls upstairs. Although I'm neither a bunny nor curly-haired, I know he will settle for me. He will probably take longer in killing me because he is so disappointed by my straight hair and my lack of a cottontail.

I keep Pete on the phone while I walk up the stairs. He tries to assure me that the dog likely sat on the remote.

No television is on. No message is on the answering machine. No one is in any closet or behind the shower curtain.

Trust me, I look.

I hang up with Pete, who promises to call back soon to make sure I'm not dead.

I lock the bathroom door and pee in rushed silence.

When I exit the bathroom, the dog comes and greets me, tail wagging and ears lowered.

She probably tracks my movements and understands when I go for one hour to do yard duty at Youngest's school. She must have lost track of time or stumbled upon a particularly good Bugs Bunny episode. 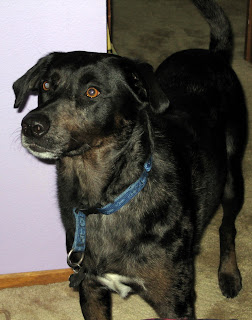 A cross between Elmer Fudd and Scott Baio? I don't even like to imagine what that sounds like. But it makes total sense that it was the dog.

And yeah, I'll own being the biggest chicken on the east coast. Or near it.

Your dog TALKS(?!) and you are blogging about having to go pee? You *are* a wingnut! Kidding!

I was working from home one day, and was sure I heard DH come in the front door. Being tied to my desk by headphones for the hours-long conference call I was stuck on, I shot him a quick email saying, "Did you just come home? I am on a conf call, can't come out for a while."

He had NOT come home, was stuck in court, and spent an agitated couple of hours worrying about me/being ticked off at me after he checked his email messages during the hearing.

I promised not to send him such emails again. If he arrived home early, he promised to poke his head in and wave "hi". Meantime, I am counting on all the clutter in the house hiding me from anyone who breaks in...

Any intruder has more to fear from my 12 pound cats than from my 80+ pound dogs.

That whole episode was creepy.

She *does* look sort of ferocious.

Elmer Baio is cracking me UP.