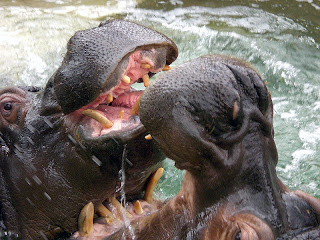 I admit to being many things, including a hypocritomas (Trademark pending). The thought that I am a hypocritomas comes to me most strongly when discussing the swirling chaos around the elementary and middle schools my kids attend. I have discovered that there are many similar creatures living in this area. I suspect there are many living in your area, too.


It occurs to me now, lo these many years after Eldest first got into the by-lottery school for kindergarten, thus ensuring his and his siblings' excellent education, sheltered from the low-performing neighborhood school they were slated to attend, that I'm not really as strident a hypocritomas as I have always felt myself to be.


The fact is that, were that by-lottery school a neighborhood school, my kids would almost certainly be slated to attend it. As the controversy surrounding the existence of that school as a by-lottery one has reached epic levels over the past couple of months, the clamor from most people against its by-lottery status has been that neighborhood kids should be able to attend the school. Why should those kids who live literally next door and down the street from the school be forced to go to another school?


The arguments from those wanting to keep it a by-lottery school have always been that it is different, that it provides a specialized education, and that, by virtue of the lottery, everyone throughout the district has an equal chance of attending it.


Saturday morning, many parents of children who attend that by-lottery school stood up in front of the school board and argued passionately in favor of allowing their children to attend their neighborhood middle school. They argued that it wasn't fair to make them go somewhere else when there was a middle school next door and down the street from where they live. They argued that it wasn't fair to let someone from much farther away take a spot and edge the neighborhood kids out from the middle school. They argued that they had bought a house near local schools -- gliding over the fact that they drive past their neighborhood elementary school every single day -- to enable their children to walk or bike to them.


These are parents of children who have attended or do attend the by-lottery elementary school making these arguments.


Those against the by-lottery elementary school are, as expected, having a field day with this.


I shrug my shoulders.


Clearly, we really do only care about our own children, all others be damned.
at March 15, 2011

Email ThisBlogThis!Share to TwitterShare to FacebookShare to Pinterest
Labels: bloated school district, I got mine screw you, public schools, school boards

That is a very interesting and accurate observation. As I have read your posts about these elem schools it always seemed to me to be a recipe for problems to have a local elem school property turned into a lottery school (of course I don't know the pre-reasons).
And now our area has just started its own community rallying for/rallying against situation. One that in which your last sentence applies as well. My kids go to the middle and high that are the most diverse in the county socio-economically and yet the high school gets academic accolades, good teachers, etc. Well, 8 years ago a new high school was built to help ease overcrowding at 3 high schools (let's call it high school P). It became the highest socio economic level school. Now it is too crowded (they built too many homes near it as of course the Count does not work with the School Board on these things). Now the Planning Board of the County has picked the most transient 'hood with only apts and weekly housing type places to be zoned back to our local school. Not many kids actually in this 'hood to ease the crowded P school so all they did was pick the area that has adults who are oblivious (as I said, very transient) and they won't dare pick any other 'hood to be zoned. So it is not going to solve any overcrowding. If they picked more hoods then it would help and our local school could get more teachers as a result of more kids. But our school is perceived as the old, yucky school. It is old, but makes the news for its AP course success, etc. But since it has higher free/reduced lunch, etc. so many parents will freak if their hood is chosen. So like I said the Committee only picked the hood that won't make a dent in the problem but they won't say a peep. Hmmm, even if there is no charter school situation here, I guess there are still issues when changes are made. It really is a different breed of a parent who can say, "I am involved with my kid and his school so he will succeed despite the old school."
But all that matters these days, unfortunately, is test scores.
What the parents in P school want is to build another school near them. We will vote against this in next election b y saying no to more taxes for new schools when there is availability in other schools (I am in the largest county in the state).
Anyway, sorry so long, but when at a meeting the other day for my FIRST ever school redistricting community meeting I thought of you. And now it is true--the parents of P want the best for their kids and those kids have been getting on blogs saying EWWWW, I wouldn't want to go anywhere else (actually it is for upcoming freshmen only), and then you have kids/parents at our school saying the same thing.
--Michele R.

Michele, I remember you talking about the local school that many bypassed to get to a "better" school, only to demand foreign language immersion and the like. That made me chuckle, particularly since one of the options to try to save the by-lottery school's special status is to make it include a foreign language immersion program. (As opposed, you know, to having the kids go to their local school and sit next to ELL kids.)

I'm sorry you're getting mired into those meetings. I know how incredibly divisive they are. We have a break until mid-April, when they tackle the full boundary study. That's when it's going to get far more interesting.

I'll give the school board credit here: they seem to have hit upon a way of dismantling the by-lottery school. I'll also give them credit for taking some of the lower income housing, which could have been added to the southern middle school's huge low-income population, and they've sent those residents to the "rich" middle school instead.

Godspeed to you, lady!

Hats off to you for being so invovled! There are those of us, not naming any names, who have bailed all together and send our kids to private schools. We pretty much suck because we are lazy slobs. Reading your posts always lends a sense of admiration to your energies for this.

You're so funny! Of course private schools suck out nearly as much from parents.