A Bunch of Yo-yos 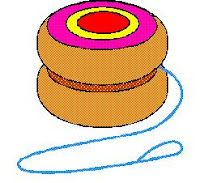 About six weeks ago, there was an amazingly cool assembly at Youngest's elementary school about yo-yos. It was one of the best assemblies ever, according to the kids. And it was after that assembly that the yo-yo craze hit the school, and hit it hard. Every kid wanted a yo-yo, and the sounds of shattering piggy banks and whining to parents for one was heard throughout the land.


Dozens and dozens and dozens of kids brought the yo-yos to school to hone their skills. Some became so obsessed that they stopped doing anything else at recess except play with the yo-yos. Every time I was there doing my yard duty tasks, I dealt with at least one kid who needed knots untangled or strings untied or justice because another kid had stolen his yo-yo or borrowed it and wouldn't return it. When the bell would ring to mark the end of playing time, many continued to play with their yo-yos. It was freakin' nuts.


There's a massively stupid rule at our school -- actually there are a bunch of massively stupid rules at our school but this one might take the cake -- that says no toys from home are allowed. [I know, right? No toys. Seriously.] After narrowly escaping the wrath of an around-the-world yo-yo gone amok, I sent an email to the principal entitled "Yo-yos Have Got to Go-go":


I think it's time that you step in and ban the yo-yos from school, citing the SCHOOL Handbook, page 7, which states "Personal items such as toys, trinkets, etc are not to be brought to school."

Not only are students bringing them to school, but they use them irresponsibly, often coming very close to whacking someone else and continuing to use them in line after the bell has rung. I'm also extremely tired of being asked to untangle knots and negotiate settlements over whose yo-yo it is.
I happen to disagree with the "no toys" rule generally, but I'm not opposed to using it to my advantage. It's time those yo-yos get left at home.
And so she banned them. But then came the backlash from students and some parents. So coming home in kids' Friday folders was a missive from the principal that opens with the lines, "One of the goals of SCHOOL is to CREATE STRONG LEADERS amongst our students. Because we believe in a democratic system, I have agreed to revisit my decision to ban yo-yos..." It goes on and on, with the upshot being that the kids on the upper yard (4th and 5th graders) will be able to use their yo-yos in a "designated area for yo-yos and there will be supervision in that area."


So I've sent along my comments, as requested in the flyer:


I am disappointed that we are going to have it be a case of upper grades get to keep their yo-yos and lower grades do not. I am also disappointed that there is going to be some type of supervision that is going to need to go on. I have to assume that is by a yard duty supervisor. I find that ridiculous in light of the number of yard duty supervisors there and the fact that one is already committed/stuck at the play structure. Were we talking about a sport, sure. But it's not a sport. It's not a skill. It's not anything that gets kids actually moving, which I always thought was the purpose of recess.

It's really a stupid first-world issue, isn't it? In the grand scheme of things, it's not worth a blip of my time (or your time but here you are reading this). Do I really care if anyone has yo-yos at school? Nope. Do I really find it freakin' hilarious that so many people have wasted so much time on this? Yup.

It's only because YOU pointed out the yo-yo problem that the kids get to have yo-yos. Silly rabbit. Love you and ciao! Ginny