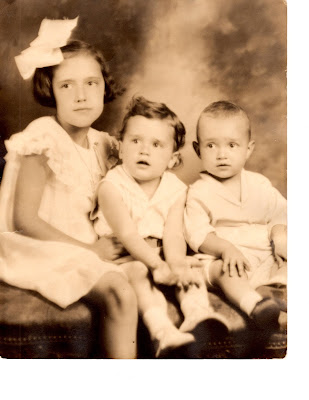 Her son, Bruce, was run over by a city councilman when Bruce was 9. I was 8. He was my cousin. A far-flung cousin who I don't remember, really. I'm sorry I don't remember him. He was traded by my sister the summer before he died. He came to spend a week, two weeks, a summer, who knows? In return, my sister went to stay with his family.

My memories of him are near nil. I was a year younger. I think he spent most of his time with my brother Stephen. Step-hen. Oh, yeah, I do remember we called him that to piss him off.

But Bruce? No, no real memories of him alive. Memories of him dead, sure. It was 1969. And first he was unconscious. And then he was dead. And my parents went to Long Island to be there for my dad's sister, Hazel, and her husband.

That might have been the occasion of the babysitter from hell. She's the one that determined that Jell-o was a dessert, much to the consternation of all five of us left behind.

I don't know, in real time, what transpired. There are old camera reels that show my mom and dad having taken the surviving older kids to a fair to make them forget it all.

Do you forget the fact that your sibling -- even if he was one of eight kids -- has died? I can't imagine there is an occasion that soon after the loss that you forget and just let yourself be taken over by the twirl of the fair cups, the dips and falls of the roller coaster, the flight of the swings.

Hazel was the oldest by a half-dozen years. A girl, a disappointment, an-easily-forgotten older sister to two boys years later, one after the other.

She's dead now, of course, as is her younger brother -- my dad -- and soon enough, the baby who followed 12 months after my dad.

I will never exist sooner rather than later. With me goes the memory of my cousin, a nice enough 9-year-old boy who really didn't care for girls.

I'll try to speak your name at my death, Bruce, so you will live on more than 40 years later, in a corner of the world that your siblings don't realize exist.
at August 22, 2013