My email just now to the superintendent, public information officer and principal of Youngest's middle school. 'Cause, you know? I'm D.O.N.E.

At pick-up on Thursday last week at NAME Intermediate School, I witnessed two NUSD employees -- I believe they are maintenance workers -- standing right outside the fence of the school perimeter in front of the parking lot/gym smoking cigarettes. I happened to hear the many f-bombs dropped by the two.

Today, as I again came for pick-up, I saw them again and parked in my same place on the street, giving me a perfect view of them and enabling me to hear them once again.

Both were smoking, once again. And the one in the gray shirt was again dropping f-bombs to beat the band. I took photos of them, and as I was emailing them to PRINCIPAL to lodge a complaint, he showed up to counsel them about their behavior. When he left, the one in the gray shirt said, "I'm going to have another smoke just to spite him." "When I saw him walking up, I knew he wasn't coming by to just say, 'Hi.'"

They want to smoke, more power to them. But not right outside school grounds. And not while lying prone in the street -- again, the most fabulous gray-shirted man -- and not while leaning on the fence. Last week, P.E. kids were out. Today, at least it was only the adults waiting to pick-up our kids.

I can swear with the best of them. And I do. (Just ask BOARD MEMBER.) But your own employees outside one of our middle schools? No. Sorry, no.

I trust that you will talk to those two and explain what the "badge" of NUSD means on their shirts. They are the face of the school district.

I also trust that they must have surely been on a union-sanctioned break. 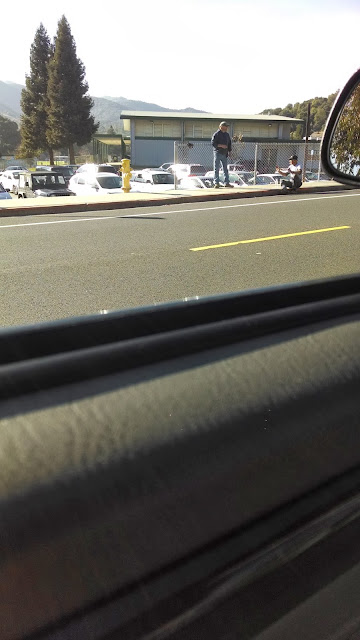 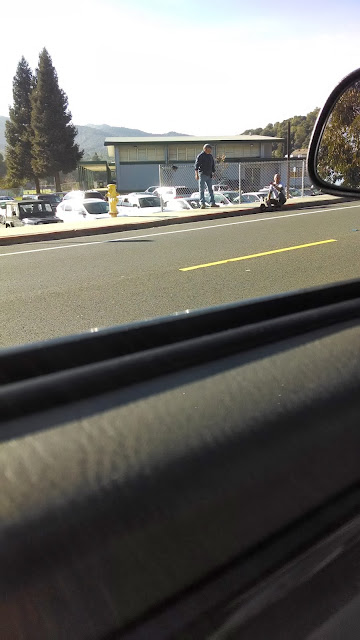