"We are Ruby's People"

That's a quote from my husband. It's been about two weeks since our cat went missing. 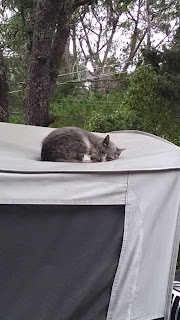 Tuesday would have been her 13th birthday. The notice on a neighborhood website regarding first a missing cat and then a second notice of its remains being found lead us all to believe that Ruby is no more. Drought has brought coyotes into our neighborhood where they've never been before. And they are ravishing any creatures they find.

And so we are certain that Ruby has fallen prey. That doesn't mean that I don't go out every morning, hoping against hope that I will see her. It really isn't unlike last spring, after the neighbor killed himself, when I'd open the door expecting to see Harry in his power-walking clothes, breathing heavily from his twice-daily two-mile walk around the neighborhood.

"She turned me off to cats," Eldest said, when we explained her likely fate to the two boys.

And that's when Pete pointed to that stupid mutt of ours and said, "That dog? She's our dog. Just like she is our dog we are Ruby's people."

She was not a welcoming cat. You could pet her. Twice. Try for a third time? She'd scratch the crap out of you. That didn't stop me from trying. And from feeding her all the time.

She was a fighter, that Ruby. She should have lived forever. I am actually comforted by the fact that a coyote got her and it was a quick death. She deserved nothing less.

You have this gift where you use not so many words, and you are relatively brief (um, compared to my wild verbosity), and, still, you are incredibly moving. Wow.

Jocelyn, I will take your verbosity anytime! Thank you for your kind words.